My Fishing Adventures on the East Coast

I have just finished my 2nd week of Lobster fishing out of Mabou Harbour Cape Breton NS. Atlantic Lobster fishing is not for the weak, this type of fishing is a lifestyle and a hard one at that. After my 2nd week completed I can tell you that this can be long hard hours on the water. Since I have started on day 2 I have had swollen hands from the repetitive action of banding lobsters for 12 hours a day. If you are not used to a certain type of work your body will let you know it fast, and won’t let you forget it either. I have had a bad bout of tendinitis in my left wrist after the first day of work and it hasn’t let up. If you have never had this before it feels like someone swinging a bat and hitting your wrist every time you close your hand, so every time I land a trap on the boat, gaff a buoy,  band a lobster, or anything that involves me using my left hand I get that feeling. I have battled it with pain killers and a tenser bandage but it only masks a portion of the pain.

Yesterday was another rough day on the water with 25km with gusts of 33km west winds it made for a rolly morning. As If the waves weren’t bad enough then our hauler (winch)went down after pulling only 30 traps onto the boat. The captain made the decision to head back into the wharf to check out the problem as it would have been too dangerous to go down in the engine room with the rough weather. Once back at the dock we checked out the source of the problem which thankfully was a quick easy & inexpensive fix and we were back heading out into the open water once again. As we headed out the weather had picked up even more as we headed out.  Try to picture this, as we headed over each swell when looking ahead we would see only sky at one moment then we would head down the other side of the wave and all we could see was water in front of us. With my life jacked buckled tight back on deck I went as we approached our next buoy in order to get the trap aboard I need to lean over the side of the vessel and use a gaff (a stick with a hook on the end of it) and try to use the hook to catch the rope underneath the buoy then pull it up and take the rope and put it on the hauler. Doing this in this type of weather with my wrist problem made for an interesting morning to say the least. Walking on the boat in this type of weather is like stumbling home after a good night of drinking but only your sober.

Anyway it wasn’t long maybe another 30 traps were pulled and the hauler decided that it was time to call it a day as all we heard was a bang below deck and the hauler once again was not working. The captain decided to call it a day and we headed back to the wharf, 1.5 crates of lobster on deck was just barely enough to cover the captains expenses for the day but none the less we were homeward bound and I had completed my 2nd week of Atlantic lobster fishing. Once back at the wharf the skipper rewarded me with enough of the ocean crusteations for a nice lobster feed. 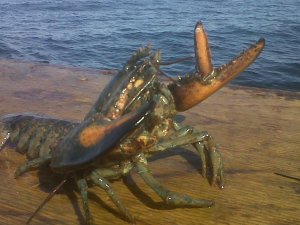